A new collection of aerial photographs of Paris, France 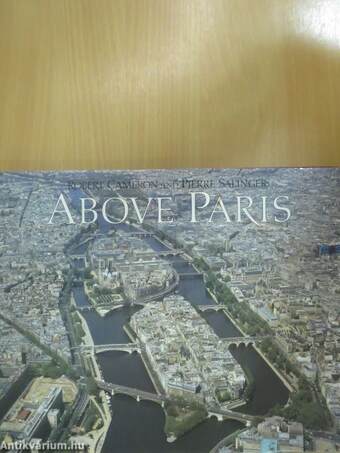 FOREWORD-ABOVE PARIS I first came to Paris in December of 1925. My mother decided it was a good occasion to have me baptized as a Catholic. She chose, not just any church, but Notre-Dame Cathedral.... Tovább

FOREWORD-ABOVE PARIS I first came to Paris in December of 1925. My mother decided it was a good occasion to have me baptized as a Catholic. She chose, not just any church, but Notre-Dame Cathedral. I was six months old at the time, but my feelings about Paris today lead me to believe that there must be some kind of osmosis at work in the being of a young child. Otherwise, why would Paris continue to haunt me long after as a place I wanted to see, and where eventually I wanted to live? I returned to Paris almost 36 years later, to help advance President Kennedy's visit to France soon after his election. I will never forget the impact the city made on me the day I landed in April of 1961.1 had the feeling I had arrived, not just in a city, but in a living museum, reflecting 23 centuries of history. Finally, in 1968, after Robert Kennedy was killed, this second tragedy of the Kennedys in my lif e in 5 years, I felt the need to get away from America for a while. The logical choice was Paris. I have been here ever since. In November of 1983 I made a brief trip to San Francisco to give some lectures at my alma mater, the University of San Francisco, and it was at that time that I met Bob Cameron. He had just finished Above Yosemite, a stunning work on one of the most beautiful regions of the United States. It was the culmination of a series of "Above" books-San Francisco, Los Angeles, Hawaii, Washington, D.C., and London. He told me he wanted to do Above Paris, and asked if I would work with him. I immediately said yes. Yet there were unexpected problems. Over the pasttwo decades security has been considerably tightened in Paris. Authorization to fly above the city in a helicopter is one of the things it is almost impossible to obtain. But I tried. In January of 19841 had my first appointment with the Préfet de Police, Guy Fougier, to apply for the necessary permissions. I took with me a copy of Above London, as my best argument. M. Fougier was enthusiastic about the idea, but even with the power he had to grant authorization, he admitted it would be very difficult. By April, however, the Prefecture was so encouraging that I advised Bob to come to Paris. Throughout the month, Paris had some of the most beautiful weather it has ever seen in April. Finally, at the end of the month, our authorization came-but for just a single hour of flight at from 1,200 to 2,000 feet, depending on the location. If that were not discouraging enough, now another factor intervened: the weather turned sour. Bob took what photographs he could, and returned home. It seemed that Above Paris was doomed. I soon discovered, however, that Bob had not wasted his time. During his stay he had taken a helicopter to the chateau-rich section outside of Paris. And in the brief half-hour over Paris he had gotten some stunning shots of the capital. We decided to make a mock-up of the book with what he had. There was still a way to get authorization for the critical photographs we needed. The mock-up arrived in Paris on June 4, and the following day I had an invitation to lunch with some high government officials. We were only eight around the table, so that after lunch I had a few moments to show them the proposed book and to explain our problem. They were taken with the project and agreed to instruct the proper authorities with the permissions. The authorizations were received within 48 hours. This time Bob would be allowed to fly at a lower altitude to give his eye and his camera a clearer view of Paris. The result is glowing, for Paris in its entirety has never been seen quite like this. The Ile de la Cité with its imposing Cathedral, the familiar but ever new Eiffel Tower, the modern Pompidou Center in its bright blue and red standing in the middle of an historic and traditional neighborhood, the Arc de Triomphe and the ChampsElysées-all are seen here in an entirely new dimension, and they add a new perspective to France's capital. This unique photographic collection reflects the long history of France, going back three centuries before Christ, through years of war and revolution, to the time when it became the cultural center of the world, an intellectual beacon to artists, musicians, architects, scientists from around the globe. One can understand why virtually every modern American composer came to Paris to do their early work, why writers like Ernest Hemingway, Scott Fitzgerald and Henry Miller made Paris thenhome. That ancient Paris has little changed, although it has acquired a bit of modem look with the skyscraper complex at La Défense, the high rise office buildings, apartments and hotels on the banks of the Seine, and the towering Tour Montparnasse, the tallest bulding in Paris, opened in 1973. From the window of my apartment on the Rue de Rivoli the view is like a living history book. Looking from left to right, I can see Notre-Dame Cathedral, the Louvre, the Jeu de Paume, the church of Sainte Clothilde, the National Assembly, the Dome of the Invalides, the Tuileries Gardens, the Grand Palais, and the Eiffel Tower. In seeing this panorama of Gothic, Renaissance, and modern structures, one relives the times of kings and empire, the Revolution of 1789, the uprising of the Paris Commune of 1871, the two world wars and the spectacular liberation of Paris of August 25, 1944, the student uprisings of May of 1968. But one also sees the neighborhoods that became the paintings of Toulouse-Lautrec, of Monet and Manet, and the inspiration of artists like Picasso and Chagall. Paris is the city of wonder. This book consecrates that wonder. PIERRE SALINGER Paris, July 8, 1984 Vissza